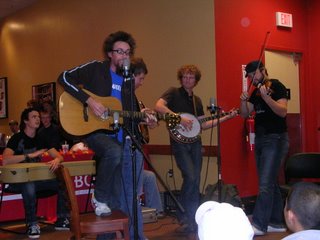 Okay. I'll readily admit it. I'm a HUGE David Crowder fan.
I live in the Atlanta area and David Crowder came to town on their tour with Third Day. DC also stopped at a Borders bookstore to hang out with his fans (of which I was on the front row---you know cause I'm a HUGE fan) and talk about Bluegrass, Marty Stewart, Hank Williams Sr. and sign his new book Everybody Wants to Go to Heaven But Nobody Wants to Die. I bought the book and he and Mike Hogan (band member and co author) signed it.
Here I am with DC himself!!!! And Mike Hogan. 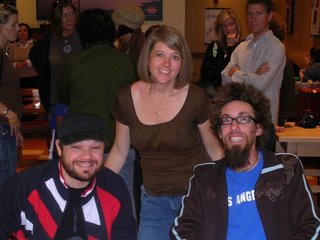 My friend asked me what I was going to say to DC. I'm glad she asked, because I had no idea. He certainly doesn't see himself as a celebrity and I don't view him as one. I view him as this. A man who loves God, who uses his gifts God blessed him with to share the message of Jesus Christ with the world. And when I did get my chance to talk to him I told him as much. I thanked him and his band for sharing their gifts. I told him they were an inspiration. He thanked me and told me he appreciated me saying so.
I had a short video I had hoped to put on this blog post, but I'm blogger challenged and I can't make it happen. So here's one more picture of DC.
If he ever comes to your city, check him out. It's well worth it. 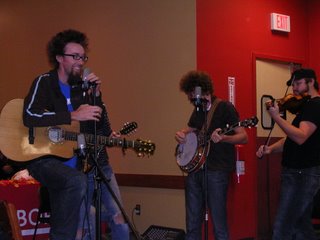 2 comments:
Email ThisBlogThis!Share to TwitterShare to FacebookShare to Pinterest

If you scroll down the page you'll find a photo of author Deeanne Gist. She writes historical romances for Bethany House. Oh, I'm sorry, she writes really great historical romances for Bethany House.
I'm very excited for Deeanne. Click here to see the reason. She just received her cover for her 2007 release Courting Trouble.
How awesome is this cover? For all of us writers, a great cover is a vision, a dream, an important part of the publishing process that we basically have little control over.
You go, Dee!!! This is great.
And on her blog, Dee is sharing an interview with the young lady who is the cover model. Go to her blog and check it out.
1 comment:
Email ThisBlogThis!Share to TwitterShare to FacebookShare to Pinterest

The thrill of victory!!!

Doesn't the title sound exciting? With exclamation points and all! (We'll get back to that.)

Meanwhile, here's a picture of the 48 car of Jimmy Johnson. He's very much in the running to be the NASCAR champion this year. For those of you who aren't NASCAR fans this picture was taken during the race in Atlanta while pit stops were going on. Our seats are right in front of Pit Road. Very exciting place to be on race day. Right in the middle of the action. 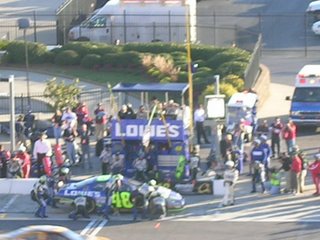 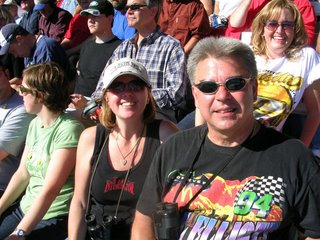 And here's me and my hubby. Isn't he cute? ( I just love my man.)
At the end of the race the thrill of victory was there for Tony Stewart and all his fans. Tony even did his trademark climbing of the fence. Yes, excitement was in the air. All because of the victory.
Shouldn't excitement be in our air everyday? After all---don't we have claim on the most exciting victory in history? The victory over sin and death? All accomplished when Jesus took up the cross, walked up the Mount of Calvary and claimed victory for us all. I can't think of a better reason for celebration. Think about it. We can celebrate victory every day. All day.

Sometimes the magnitude of God is really so hard to grasp. But I"m trying bit by bit to understand what I'm meant to understand, do what I think I'm meant to do and live for Him. Trying is the key word here. I think I fail more than I succeed. But I"m going to keep on trying. Never give up.
Persistence is the key. Jimmy Johnson is persistent. Tony Stewart is persistent, still winning races even though he's not even in the Race for the Chase and can't possibly be the Cup Champion this year. He didn't let that stop him from doing the best he can possibly do.
So let us persist and run the race.
Diligently.
6 comments:
Email ThisBlogThis!Share to TwitterShare to FacebookShare to Pinterest
Newer Posts Older Posts Home
Subscribe to: Posts (Atom)